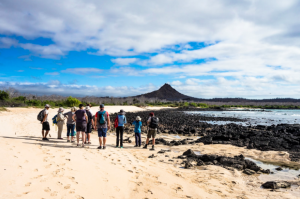 The Galapagos Islands are a great year-round destination for a Galapagos cruise as there really is no off-season as opposed to many other wildlife sanctuaries around the world.  Our peak season departures correspond to when more people tend to travel based on holidays and school breaks and not due to the amount of wildlife you will see.  If you are planning your trip on a peak week you should book at least 6 months prior to your desired departure and at least 4 months prior on seasonal departure dates.  For holiday weeks you need to book one year in advance.

For those interested in visiting the Islands at “the best” time, there really is no better or worse time to visit.  This is because the Galapagos Islands are located right on the equator and air and water temperatures do not vary by much – see below.  In addition, almost all of the animal species you will see arrived because they floated there on rafts of vegetation or were blown in by wind currents.  Species such as the Galapagos penguin, flightless cormorant, marine iguana, land iguana, blue-footed booby, Galapagos hawk, fur sea lion, California sea lion and most all other species spend the entire year in the Galapagos and do not migrate. The only exception is the waved Albatross that leaves Galapagos from January to March.

Located on the equator, the Galapagos Islands have a surprisingly cool, sub-tropical climate. The larger islands with volcanic peaks have a variety of climatic zones. The coastal areas are arid and covered with plants adapted to desert conditions. The highland areas receive moisture almost all year round, which support lush vegetation. Temperatures are determined almost entirely by ocean currents, which are influenced by the trade winds.

There are two seasons, both of which have some precipitation. The Galapagos get an average of ten inches of rain per year, so it is never considered “rainy”. Unlike most equatorial regions, the Galapagos are not hot and humid; they lie instead in one of the Pacific’s “dry zones” where temperatures remain abnormally low, cooled by upwelling in the sea. The Galapagos cycle through two distinct seasons: the warm/wet season (January to June) and the cool/dry season (July to December).

From June to November, the cold Humboldt Current sweeps northward from the Antarctica . When it reaches the northern tip of Peru , the southeast tradewinds push it toward the Galapagos. This mass of cold water cools the air and creates an inversion layer over the islands. The inversion upsets the usual weather pattern associated with the tropics. While the lowlands are experiencing drought, the highlands receive misty precipitation locally known as “garua” (pronounced gah-ru-ah) season, which means mist in Spanish.

During the months from December to May, the cooling current subside, temperatures rise and the southeast trade winds and the Humboldt Current vanish. Warm waters flow south from Panama . Periods of rain are strong but are of short duration. Temperatures are warm and sunny days outnumber cloudy days. Some years, the flow of warm water is greater than normal and a phenomenon known as “El Nino” results. Surface water temperatures climb higher than usual and rainfall greatly increases. Life on land flourishes, but seabirds and marine life frequently experience extreme breeding failures.

June
Beginning of the dry season with the arrival of the Humbolt current. Giant tortoises migrate from the highlands to lowlands for suitable nesting places to start the nesting season.

July
Sea birds are active, especially blue-footed boobies on Espanola Flightless cormorants court and nest on Fernandina.  It is possible to find oyster catchers nesting on Puerto Egas. Lava lizards initiate mating rituals until November.  Whales and dolphins are more likely to be observed, especially off the Western coast of Isabela.

August
The Galapagos hawks court on Espanola and Santiago.  Large colonies of Nazca boobies and swallow-tailed gulls nest on Genovesa.  Temperature of the ocean descends to 18° C (64°F) which obviously varies according to the geographic zones among the  islands. Migrant shore birds start to arrive, and stay on the islands until March.  Giant tortoises return to the highlands.

September
Peak of the dry season. The air temperature reaches its lowest (19°C – 66°F). Penguins demonstrate remarkable activity on Bartolome until December.  Sea lions are very active, females give birth, specially in the western and central areas of the Archipelago. Most species of marine birds remain active at their nesting sites.

December
The islands receive warm waters from the basin of Panama; the Panama Flow. Hatching of the giant tortoise’s eggs begins and lasts until April. Green sea turtles display their mating behavior.  The warm season begins and all of the plants of the dry zone produce leaves. Galapagos “turns green”. The first young albatross fledge.