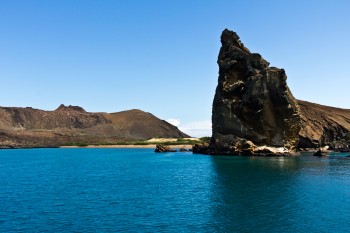 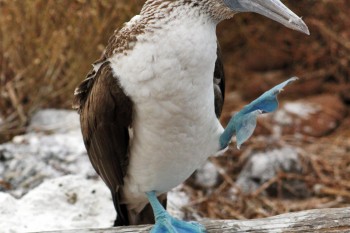 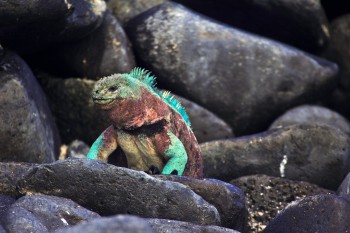 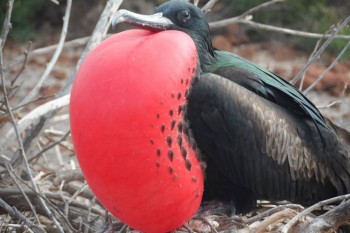 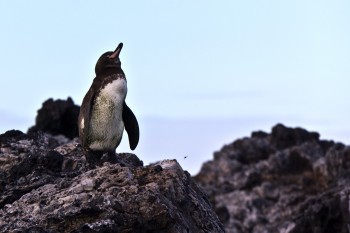 Giant tortoises in the highlands

Giant tortoises in the highlands 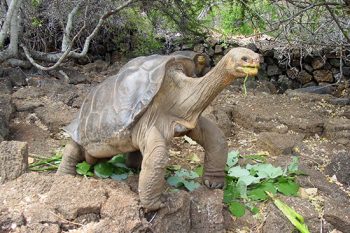 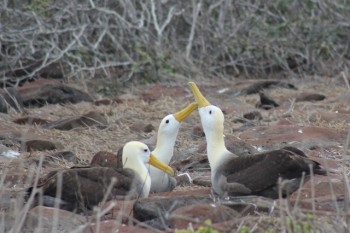 Kayak and swim with sea lions

Kayak and swim with sea lions 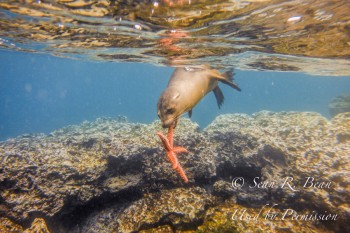 SUNDAY: Fly to Puerto Baquerizo Moreno on SAN CRISTOBAL Island (SCY), and transfer by bus to the main dock and then by Zodiac to the ERIC or LETTY anchored in the bay. After a welcome briefing and safety drill, a delicious buffet lunch is served on board. In the afternoon, travel by bus to Cerro Colorado to visit Centro de Crianza Jacinto Gordillo (La Galapaguera) where the National Park has established a breeding program for giant tortoises in their natural habitat. At the visitor center, Learn about the origin and evolution of tortoises, as well as threats by introduced animals. Along the trail, watch for the San Cristobal mockingbird and Calandrinia plant, both endemic to this island. Return to the yacht for a briefing followed by the Captain’s welcome cocktail party and dinner prepared by our chefs.

MONDAY: Spend the entire day on GENOVESA (Tower) Island, one of the most spectacular places in Galapagos for bird species. Land at Prince Philip’s Steps, where red-footed boobies nest in palo santo trees, while Nazca boobies nest near the trail, and storm petrels gather in large numbers in an open lava field. With luck, you may spot the elusive short-eared owl. Return to the yacht for lunch on the sundeck. Choose to paddle from a kayak or stand up paddle board and explore the cliffs. Look for the red-billed tropic bird hiding in the crevices, or snorkel in deeper water from the Zodiac. Land at Darwin Bay, a coral sand beach where swallow-tailed and lava gulls gather near the tide pools. Enter a forest of Optuntia cactus and mangroves where colonies of great frigate birds nest, the males inflating their red-throated pouches to attract females as they fly overhead. Chose to relax on the beach or swim with sea lions in these northern warmer waters. Return to the yacht for a briefing and dinner followed by a sky full of stars.

TUESDAY: Today guests on board the Letty visit Las Bachas beach, which is the Spanish translation for “barges”. There is a long stretch of a soft white sand beach and interior lagoons where we find the Greater Flamingo, pelicans, white-cheeked pintail ducks, stilts and iguanas. There is also a wonderful chance to take a stroll along the beach or swim from the shore. Guests on board the Eric have a Zodiac ride at Caleta Tortuga Negra (Black Turtle Cove) through a series of coves and inlets surrounded by mangroves. View pairs of mating sea turtles (Sept to Feb), white-tipped reef sharks and golden cow-nosed rays. Return to the yacht for lunch. This afternoon, step ashore on Cerro Dragon (Dragon Hill), for a majestic view of the bay and the island landscape covered in Opuntia cactus, palo santo and muyuyo. The trail offers excellent opportunities to see Darwin finches, Galapagos flycatchers, yellow warblers, shearwaters and the endemic land iguanas, that were once part of the park’s breeding program. In the salt-water lagoon, pink flamingos feed alongside other birds such as stilts, pintail ducks and sandpipers. After the briefing and dinner, we sail toward the western islands and cross the equator line for the third time.

WEDNESDAY: This morning’s stop is at Punta Espinoza on FERNANDINA, the youngest and most pristine Island in Galapagos with no introduced animals. Recent lava flows formed by an active volcano stretch their way around the coast. Observe sea lion harems with resident bulls carefully guarding their territory, and hundreds of marine iguanas, the largest colony in Galapagos, basking in the sun along the rugged shoreline. Out on the point, Flightless Cormorants build their nest close to shore since loosing their ability to fly. There is a chance to snorkel with sea turtles and marine iguanas that frequent this area before returning to the yacht for lunch. While cruising through the Bolivar Chanel, whales and dolphins riding the bow wave are often seen here. Disembark at Urbina Bay on ISABELA Island, where four miles of coastal seabed were exposed due to a dramatic uplift during a volcanic eruption in 1954. See the remnants of coral skeletons, some of them waist-high, and keep an eye out for the very large and colorful Galapagos land iguanas, as well as marine iguanas, Darwin finches, brown pelicans, flightless cormorants and giant tortoises. Return to the yacht for briefing and dinner.

THURSDAY: Visit Elizabeth Bay on ISABELA Island by zodiac to explore a secluded cove, lined with large red mangrove trees, where sea turtles, turtles, rays, and shore birds are often spotted. Motor along the rocky islets “Las Marielas”, to find a colony of nesting Penguins, Flightless Cormorants and giant marine iguanas. Isabela was created when six volcanoes flowed together and formed the largest Island in Galapagos. Return to the yacht for lunch served on the sun deck. Go ashore on Tagus Cove, a favorite anchorage for pirates and whalers over the centuries. Sections of the rocky cliffs are covered with graffiti dating back to the 1800s. An uphill hike brings us to a salt-water lagoon, a scenic overlook with a spectacular view of the ocean, lava fields and volcanic formations. Take advantage of the secluded cove and explore the shoreline by kayak or stand up paddle board in search of Galapagos Penguins, Flightless Cormorants, blue-footed and Nazca boobies and pelicans. An excellent snorkeling site is offered from the zodiac. After dinner, a sky full of stars beckons to go on deck and observe the galaxy while crossing the equator for the last time.

FRIDAY: Stroll along the shoreline at Puerto Egas on SANTIAGO (James) Island looking for octopus, starfish and other sea life caught in the tide pools. At low tide, catch a glimpse of marine iguanas as they feed on exposed green algae. Watch for great blue herons, lava herons, American oystercatchers and yellow-crowned night herons. The walk ends at the grottos, deep pools of clear water where we encounter fur sea lions once on the verge of extinction. Before returning to the yacht, there is a chance to snorkel from the beach. After lunch, take a seat on deck to view the dramatic landscape and dolphins that are often spotted here. Disembark on RABIDA (Jervis), a small island considered the geographic center of Galapagos because its volcanic rocks are the most diversified in the archipelago. The dark red color of the beach comes from the high iron content in the volcanic stones. Follow the trail to a salt water lagoon where greater flamingos migrate, keeping an eye out for marine iguanas, mockingbirds, yellow warblers and Darwin finches. Afterwards, do not miss the chance to snorkel with sea lions and rays as well as tropical fish and white-tipped sharks. Return to the yacht for dinner and a briefing.

SATURDAY: Disembark at Puerto Ayora, SANTA CRUZ Island, the social heart of the Galapagos, with a population of 24,000 humans. Travel by bus to the highlands, passing through all seven vegetation zones found in Galapagos. Visit Rancho El Manzanillo, a privately-owned hacienda where giant tortoises roam in their natural habitat. Stop at the lava tunnels, that are large enough to walk through, and visit Los Gemelos (The twins), a pair of large craters. Return to the yacht for lunch on board and a briefing. This afternoon, visit the Centro de Crianza Fausto Llerena (formerly Charles Darwin Research Station). Visit the tortoise corals and the breeding center with hatchlings and miniature tortoises that will be repatriated when grown. A new exhibit recently opened honoring Lonesome George, a worldwide icon of conservation as the last surviving tortoise from Pinta Island that tragically died of natural causes. We stop at a local chocolate shop to learn how high-quality Arriba cacao is produced in Ecuador. Stroll through town to shop for souvenirs or stop at a museum or internet café – or for a more active afternoon, we can arrange for kayaking at Punta Estrada or a bicycle ride (additional charges apply). Return to the yacht for dinner or, if you wish, remain in town for dinner on your own and stimulate the local economy. Zodiac shuttles from the yachts to the main dock will be offered throughout the evening.

SUNDAY: After breakfast, travel by bus to the Interpretation Center on San Cristobal Island to gain a more complete understanding of the natural and human history of the Islands. Afterwards, spend time in port before heading to the airport for our flight back to the mainland.

Passengers can disembark on Saturday in Baltra for a shorter, 6 night cruise. On seasonal departure dates only, we offer a 10% discount off the 7 night cruise rate that cannot be combined with any other promotional or child discounts. On peak departure dates, passengers can still disembark on Saturday but there is no discount offered. The return flight from Baltra is subject to availability and confirmation is requested at the time of booking. Add $26 for the Baltra airport surcharge. For passengers departing early and requiring a transfer to the airport with a guide, there is an additional charge of $50 per person (max $200).
ITINERARY B – 6 night option

Departing passengers are transferred by private VIP van to the Itabaca canal, followed by a 10 minute ferry crossing, then a 15 minute bus ride to the Baltra airport for check in for your flight on Aerogal at 10AM or 1PM. Only for passengers confirmed on the later flight, you will have time to visit the tortoise reserve in the highlands where we encounter giant tortoises in their natural habitat. Reminder: The return flight from Baltra is subject to availability and confirmation is requested at the time of booking. Passengers who disembark and remain in port can depart in the morning after breakfast. If you participate in the group tours and meals the discount does not apply.