Located about 600 miles west of Ecuador, the Galapagos Islands were created five million years ago by undersea volcanic eruptions. In 1535, Tomás de Berlanga, Bishop of Panama, floated into this archipelago and named it Galapagos after the giant tortoises he encountered. Pirates used the islands for refuge and to bur y their stolen treasure, but it wasn’t until the end of the 19th century, when it became a regular port of call for whaling fleets, that the wildlife was threatened.

The islands’ most celebrated visitor was Charles Darwin, who arrived aboard the HMS Beagle in 1835. The rare life forms he encountered helped him formulate his theory of evolution, which he published in The Origin of Species by Means of Natural Selection.  After visiting the Galapagos in 1941, Herman Melville entitled his book The Encantadas. But it wasn’t until 1959 when it became par t of Ecuador’s national park system that this fragile ecosystem with its rare and endemic species came under protection. In 1979 the Galapagos archipelago was declared a UNESCO World Heritage Site.

Wildlife wanders freely and almost fearlessly in the Galapagos. This remote island group with its dramatic and desolate beauty is home to some of the most unique species in the world. Many are endemic such as the Galapagos tortoise, marine and land iguanas, the flightless cormorant and, of course, Darwin’s famous finches. Darwin noted that different species adapted to fit different niches on individual islands, which gave rise to his idea of natural selection.  You may glimpse a frigate bird in courtship, his bright-red breast puffed up in a dazzling display, or the spectacular dive of a blue-footed booby fishing close to shore, or the graceful waved albatross – so comical and clumsy when taking flight. It’s all here in the Galapagos, a treasure-trove of natural history awaiting your discovery. 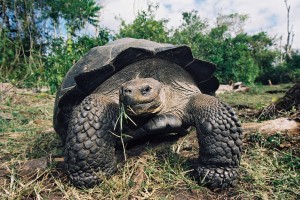